skip to main | skip to sidebar

Here are a few clips I tossed together that were shot with the D300s. The lens used was the AF-S Nikkor 12-24 f/4 ED. Picture control setting was on "Vivid". I don't remember what aperture I used.

Audio was via the camera's onboard mono mic. I'll have to consider getting a nicer external mic in the future, since in the bicycle sequence, you can hear the sound of the zoom ring on the lens being manipulated.

Overall, I'd say the camera's video function is interesting, but it would be better if Nikon had included selectable frame rates and manual shutter speed and exposure control. Canon managed to include these features on their new EOS 7D body, AND for $100 less to boot. If Nikon were to do a firmware update that added these features, like Canon did with the EOS 5D Mk.2, this camera would show some real promise as a video SLR, despite being limited to 720p.

Posted by Dan Irving at 2:31 AM No comments: 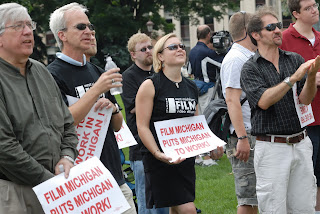 On August 18, I had a great time networking with Michigan Filmmakers during the Rally to support the Michigan Film Incentives Package. As a former newspaper staff photographer now looking to work in the film industry, it goes without saying that I hope the incentives will be allowed enough time to work.
Posted by Dan Irving at 2:14 AM No comments:

So tonight I attended the opening of the first annual Michigan Film Festival, held at the Grand Rapids Art Museum. All in all, it looks like Saturday is going to be a busy day. Looks like there will be plenty of speakers, but I hope to catch an actual film or two if I'm lucky.
Posted by Dan Irving at 1:47 AM No comments:

Dan Irving
Be sure to check out some of my portfolio images at www.irvingimage.com